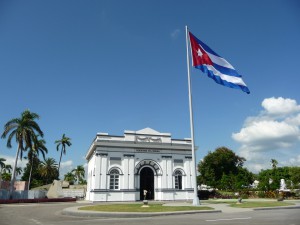 Cementerio Santa Ifigenia is the second oldest cemetery in Cuba.This Cemetery constitutes a reminder of the last and present history of Cuba, because there lies some of the personalities’ rest more valiant and illustrate of the independence wars, as well as some outstanding figures of the art and the Cuban culture.

The Main Tombs and Monuments of the Cemetery are Estrada Palma first president; Emilio Bacardí of the famous rum dynasty; Mariana Grajales, Maceo’s mother; Carlos Manuel de Céspedes; and, Compay Segundo of Buena Vista Social Club fame. The title of his last song, Las flores de la vida, is carved on his gravestone, and there is a bronze replica of his guitar and hat.
One of the most visited places is the Mausoleum of 24 meters height that keeps the ashes of José Martí, where in a perpetual way falls a sunbeam on his tomb.

It’s a wonderful place to visit, a stunningly beautiful memorial.The changing of the guards at the Marti memorial happens every half hour (24/7) and is a splendid spectacle.
There is rumor that …”Fidel Castro will be buried in this cemetery”

From the 1st of June Iberia Airlines will resume flights between Madrid and Havana.

The group announced that, including Iberia Regional Air Nostrum franchise, about 39 new routes will be opened this summer, including 19 additional destinations to the network and increasing offers in flights or seats in 22 of its current itineraries.

Three destinations are opened in the long-haul network: Havana, Cali and Medellin
Published by Prensa Latina

Cuba – US an unprecedented dialogue on human rights

Delegations from Cuba and the United States are preparing conditions today for the holding here tomorrow of an unprecedented dialogue on human rights, framed in the rapprochement process announced on December 17 by Presidents Raul Castro and Barack Obama.

Although many issues are in the agenda parallel to steps to normalize diplomatic relations and open embassies in their respective capitals, this arouses particular interest in both countries and the international community, since it is one of the most used by Washington against the island.
State Department spokesman Jeff Rathke: “The objective of the meeting is to discuss the structure and methodology for future talks on the issue,” he said.
Aviation, legal and orderly migration, postal mail, marine protected areas and hydrography are also among the issues of common interest, boosted by the December 17 announcements.
Since then, Cuba and the united States have held three rounds of talks, two in Havana and one in Washington, focused on the restoration of diplomatic relations and the opening of embassies.
Published by Prensa Latina

FRESNO, Calif. (KFSN) –
Fresno Assemblyman Henry T. Perea is leading a delegation to Cuba next week in hopes of fostering a trade relationship. Their hope is to create a direct line of communication from Valley growers to Cuban customers.

For 53 years, a strict embargo has kept the United States and Cuba from doing business. So when the ban against trade and travel was recently lifted, Perea said he saw an opportunity for the Central Valley. “It turned out there was a huge interest in wanting to visit Cuba, establish relationships and learn how to export more agricultural products into the island,” he said.

On Monday, Perea, other policymakers, farmers and representatives of the agricultural community are meeting with leaders in Cuba. Loren Booth, president of Booth Ranches in Orange Cove, is one of the 27 delegates. Her goal is to see how the oranges from her farm could do in the Cuban market. “Just a cursory sort of exploration of possibilities and what’s available, and sort of what their expectations are of the United States and just to hear where they were and where they hope to be,” said Booth.

Cuban leaders are showing interest in some Valley commodities. Early export favorites, Perea said, include dairy products, rice, any kind of tree nut, almonds and oranges. “If we can walk away from this trip with a better understanding of how to make our commodities in the Valley and in the state of California more competitive and attractive to Cubans, then I will consider that a success,” said Perea. The trip won’t cost taxpayers anything, he said, as they explore a possible foothold in Cuba.
Published by ABC30 Japanese Foreign Minister Fumio Kishida could visit Cuba next month, a report said on Thursday, becoming one of the highest-profile visitors to the isolated island since a thaw began between Washington and Havana.

If the visit goes ahead, Kishida is expected to call for closer ties with Cuba, where Japanese companies can invest in infrastructure projects and mineral resource development, Japan’s public broadcaster NHK said.

Kishida may make the visit in late April when he travels to the United States for a meeting on the UN nuclear non-proliferation treaty and to hold security talks with the US side there, it said.

It would make him the first Japanese foreign minister to visit the communist island, the broadcaster added.

The move comes after Washington and Havana in December announced they would set aside their Cold War enmity and renew diplomatic ties.

During his visit, Kishida may hold talks with Foreign Minister Bruno Rodriguez and other Cuban officials, NHK said. The two foreign ministers met in Tokyo in 2013.

Japan and Cuba have maintained diplomatic ties but their channels were limited due to the discord between Cuba and the United States, Japan’s key ally.

Asked about the reported visit, a foreign ministry official only said: “Nothing has been decided yet.”
Published by Daily Mail 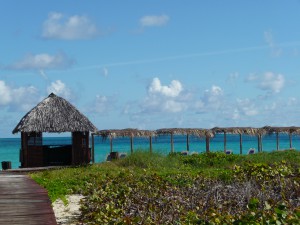 The rise in the arrival of travelers was of 23.3 percent compared to the same period of the previous year, mainly due to the growth of Cayo Santa Maria pole, where more than 7 700 rooms are exploited.

Around 73 flights arrived weekly to Abel Santa María International Airport, in Santa Clara, to exceed forecasts by 6.6 percent.
The main markets were Canada and Latin American nations with passengers from Panamanian airline Copa, which started flying to this city last December, he said.
It was also remarkable the increase in visitors from Poland, with the arrival of the first flight in the history of the terminal from that European country in November of the previous year
The systematic increase in the reception of people of other nationalities also responds to the improvement of air operations.
The growth in the presence of tourists in Villa Clara corresponds to the rise of arrivals at Cuba, which received last January 371 160 passengers, 16 percent higher than the same period last year, according to the National Office of Statistics and Information.